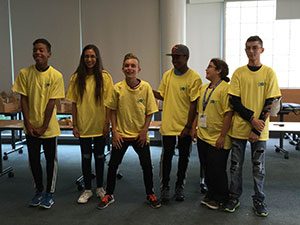 Some of the participants have brought the skills they acquired to their new high schools, while three others, who are now in Grade 8 at St. John Paul II CES, have taken on leadership roles with the school’s Tech Crew.

St. John Paul II CES Principal, Lawrence Tavolacci attended the Camp’s closing ceremonies, which featured a showcase of the new skills learned by the students. He was extremely proud of the students, who raved about their Skills Work Camp experience. The teaching faculty who delivered the week long camp said that the Richmond Hill students from St. John Paul II CES were among the best group they have ever had at a Skills Canada camp. Great job students!