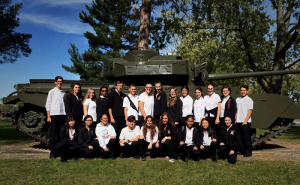 On October 12th, VIMY 2017 student delegates from St. Elizabeth CHS in Thornhill, traveled to CFB Borden to visit the training grounds from where soldiers of the First World War traveled to France; and to the historic battle of Vimy Ridge. The CFB Borden base recently celebrated its 100th anniversary this past summer and has a large collection of historic elements.

The St. Elizabeth delegation of 28 students and 2 teachers was greeted at the Base Borden Museum by Major John Fisher, who led the group through a plan of what they will see in Arras and Vimy and what to expect during their upcoming visit to sacred Canadian battle grounds taking place next April. Each student was assigned a particular soldier from the 157th CEF Battalion Simcoe Foresters, who served and died at Vimy. Students are now researching the soldier and his life story and will visit the grounds where he died.

Having just returned from Vimy, Major Fisher told students details about where each of their assigned soldiers served, was wounded, fell in battle, and was buried. It was an eye-opening experience and helped to bring the reality of their sacrifices closer to home.

Following Major Fisher’s presentation and a demonstration of the weaponry used in 1917, students were able to see and a variety of artifacts stored at the Base Borden Museum. Major Fisher explained some of the inner working of WWI to students and showed them some of the vehicles, firearms and weaponry used throughout the decades.

The student group also explored Hanger 11, an original hanger from WWI preserved and now used to store aircrafts and training items from WWI. Again, the group was in awe of the many artifacts, stories of the servicemen, and the display of 100 year-old technology.

The retrospective military experience continued into lunch, where students ate with serving members at Vicars Mess Hall. This state of the art kitchen and dining hall has a unique design, award-winning architecture, and is neat and orderly as expected by the military.

Following lunch, the St. Elizabeth CHS group visited Worthington Park, where General Worthington and several other military officials are buried. There were also tanks permanently on display throughout the green space.

The group also visited a nearby wooden area where original WWI training trenches were recently uncovered and preserved. Students has the opportunity to crawl into, and through the trenches to experience what soldiers may have felt 100 years ago when they trained for WWI.

Students visited Memorial Wall, a recently unveiled monument designed by Canadian Artist and Sculptor, Marlene Hilton Moore. The nine-metre, granite wall has a bronze statue of a bugler. It contains soil from Vimy Ridge in an urn. Thanks to the donations of local business and individuals from the local community, the memorial was erected to help preserve the memory of men who fought and died and role that CFB Borden and surrounding communities played in preparing those men for their service. The memorial wall reads:

To those who fall I say, “You will not die, but step into immortality. Your mothers will not lament your fate, but will have been proud to have borne such sons. Your names will be revered for ever and ever by your grateful country, and God will take you unto Himself.”  GENERAL ARTHUR CURRIE

The entire day was a profoundly moving one for the St. Elizabeth delegates. Many students commented afterwards that they arrived excited and left encouraged, impassioned and proud to continue their journey to Vimy Ridge, France, in memory of the Canadian soldiers who traveled from CFB Borden 100 years ago.

The St. Elizabeth student delegates are also hosting an evening called, A Night to Remember… Lest We Forget to honour and thank our Canadian veterans for their service and sacrifice. This evening will be on November 8th at 7 p.m.  in the school’s cafeteria. The event will feature poetry recitation, musical performances, visual tributes and art displays, highland dancers accompanied by a piper from the 48th Highlander Regiment, and more. The entire YCDSB community is invited to attend. Admission is $5, but free to all uniformed veterans and serving personnel. Tickets can be purchased online or at the school. 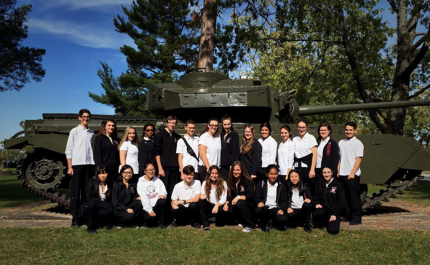 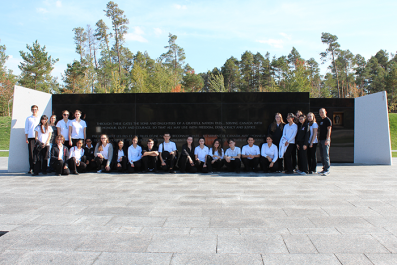 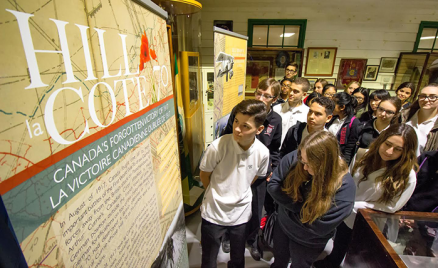 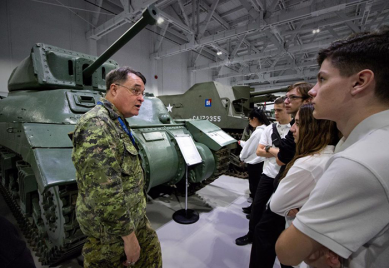