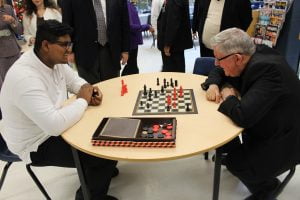 Grade 12 student has an unexpected experience of a lifetime

Father Michael McGivney Catholic Academy held a special blessing Mass to celebrate its 25th Anniversary on Wednesday, December 7, 2016. His Eminence Cardinal Thomas Collins celebrated Mass in the school’s gym; it was the first time the Cardinal had visited the South Markham school.

Following Mass, a small luncheon was held for the many special guests who were visiting the high school. Many McGivney students assisted, including Grade 12 student and Student Council President, Richards Alexander. Before the special guests arrived for the luncheon, Richards was asked to “greet Cardinal Collins and keep him entertained.”  Richard succeeded in his duty; for when the other the luncheon participants arrived they were surprised to see Richards playing an intense game of chess with the Cardinal, which lasted well over a half hour.

“I’m in shock. I still can’t believe that really happened,” said Richards afterwards about playing chess with His Eminence Thomas Cardinal Collins. “When I woke up this morning, I never would have guessed that that would happen today. It wasn’t planned, it just came up. I will remember this experience for the rest of my life.”

The Markham high school is planning to host additional 25th anniversary celebrations that former staff, alumni and the entire McGivney community will be invited to in the spring.