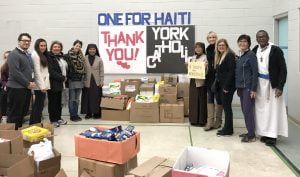 THE POWER OF ONE! That’s what we experienced with YCDSB’s “One for Haiti” Thanksgiving food drive. Director Patricia Preston’s open arms to Fr. Brian Kerr from the Missionaries of the Poor set the ball in motion inviting every member of the York Catholic School community to donate one non-perishable food item to feed the people in Haiti who have been devastated by not one, but four hurricanes and several tropical storms in the last several years. The Compassionate Franciscan Sisters of the Poor, a sister branch of the MOP ministry, serve over 165 mountain village families, with 300+ children who live in the hills of Haiti.

Haiti is the poorest nation in the Western Hemisphere. With oil too expensive for the impoverished nation, charcoal from burnt trees has provided approximately 85% of the energy needs in Haiti for decades. As a result, Haiti’s 8 million people in poverty have relentlessly hunted and chopped down huge amounts of forest, leaving denuded mountain slopes that rainwater washes down unimpeded. Four of 2008’s tropical storms and hurricanes contributed to the devastating floods that killed thousands. Most recently. Hurricane Matthew, Hurricane Irma and Hurricane Marie have made matters unbearable for the people of Haiti. That’s where the York Catholic School Board has come to the rescue!

The Compassionate Franciscan Sisters of the Poor follow the same mission as the Missionaries of the Poor; their focus is helping the poorest of the Poor. Founded by Fr Richard ho Lung, a Chinese Jamaican Priest in the 1970’s, the Missionaries of the Poor are no strangers to the schools of the York Catholic School Board or the York Regional Police Force. Affectionately referred to as the ‘MOP’, the Missionaries of the Poor have been a part of many of our school communities for years. Students from St. Elizabeth Catholic School Board ventured to their mission in Naga City, the Philippines in 2000; for several years thereafter, students and staff from Fr. Michael McGivney served the poor every March Break at their mission centre located in Kingston, Jamaica. The face of the MOP here in Toronto has been Fr. Brian Kerr. He has led many school retreats, masses and presentations in numerous schools in the YCDSB for the past 20 years. His inspiring presence has led so many of our students to give of their time and energy to assist the poor in various parts of the world including Africa, Indonesia, India, the Philippines, Haiti, and Jamaica.

When Hurricane Irma recently hit Haiti, Sister Marie climbed a tree in a remote field in order to get a cell phone signal and appeal for help from the Missionaries of the Poor. Although several attempts were made to send food by ship, transport and aircraft, it was only a helicopter that was able to successfully land and provide short term food supplies to over 300 children and 165 families destitute and desperate for help!

With the overwhelming response from every YCDSB elementary and secondary school, we have collectively shipped two 40 ft. containers full of food to Haiti and Jamaica! We exceeded our expectations and have enough left over to initiate a third container at Christmas with continued food donations from York Catholic school communities.

It emphasizes to me, as a former Superintendent of the Board, my pride in having been part of the best educational system in the province, equipped strong academic skills and more importantly, responsible citizenship and a sense of giving back to the community. That is what Christ centred education is all about. That is why York Catholic is the best board in the province- consistently at the top of the heap in terms of Fraser Institute ratings and EQAO results, but more importantly, always demonstrating FAITH in ACTION.

Thank you to all the students, staff, retired teachers and Principals who came together to demonstrate Faith in Action. Margaret Mead, a social anthropologist once said, “Never underestimate a small group of committed, thoughtful people to change the world. For indeed, it’s the only thing that can.”

Thank you, York Catholic for coming together and making the world a better place!