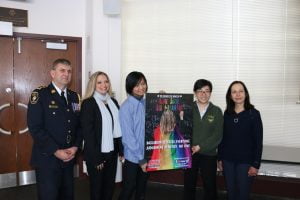 The students were recognized for their artwork at a press conference held on January 10th in Markham, where they also received $250 each for their winning posters. Crime Stoppers and York Regional Police officials were thrilled with the creative submissions they received, based on the theme, “Inclusivity Elevates All.”  Over 50 entries from students in both the YCDSB and YRDSB school boards were submitted, and the top three posters were all from York Catholic students!