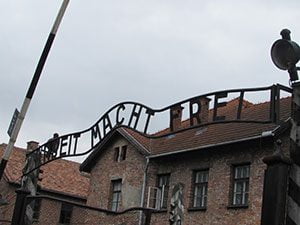 January 27th, 2018, marks the 73rd anniversary of the liberation of the Auschwitz-Birkenau concentration camp, and as such, all YCDSB schools will participate in age-appropriate teachings about the Shoah (Holocaust).

Holocaust Awareness Day serves to commemorate the many people who died and suffered during the Holocaust, as well as to remind YCDSB school communities that hatred hurts all of us, and that as Catholics we are called to love and respect everyone in our communities.

St. John Paul II referred to the Shoah as, “the inhumanity with which the Jews were persecuted and massacred” and called upon Christians to keep the Shoah in our moral and religious memory so that such injustices would never be repeated.

The York Catholic District School Board encourages its students to develop their own voices for justice and to challenge exclusion and bullying of all forms.

We ask you to pray with us:

A long time ago, during World War II
Some people hated so much
That they tried to kill all the Jewish people.
Millions of people from other groups were also killed.

We ask you to bless the souls of those who died,
Be with the families who lost loved ones.

Help us to know that hatred is strong,
But love is stronger.

Let us show the people, who hate others,
That loving each other is better.

We pray this in the name of Jesus, Your Son.