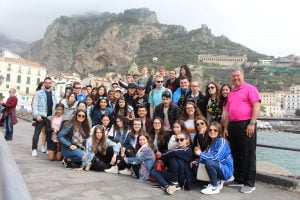 A truly remarkable way to spend the March Break for anyone would be to travel from north to south in one of the most beautiful countries in the world, Italy. That is exactly what students, teachers and supervisors from the YCDSB did this March Break and what a time they had. Close to 50 students from St. Theresa of Lisieux and St. Robert Catholic High Schools under the guidance of Principal Joe Servidio, Gianluca Saggese, Connie Ciarallo and Claudia Sabatini embarked on the 6 th annual STL March Break Italy tour arriving in Verona, the city of love.

Some of the students studying Shakespeare made sure they took pictures in the picturesque courtyard under the balcony of Romeo and Juliet. From Verona the group then visited Venice and enjoyed a gondola ride through the beautiful canals. Our journey continued as we visited Florence, the capital of the Renaissance. Grade 11 student Daisy Kim said visiting Florence was romantic, enchanting and utterly irresistible! All roads lead to Rome however so our next stop was Rome. Piazza Navona, the Pantheon, the Trevi Fountain, the Spanish Steps and the Colosseum were among some of the stunning places we saw in the eternal city. 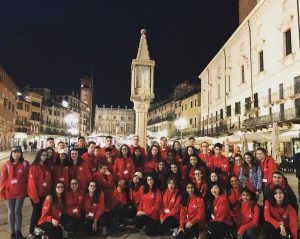 The second half of our journey would be spent in the Campania region, a small medieval hillside town called San Gregorio Magno in the province of Salerno. This town has been welcoming our students for a number of years now and once again was quick to embrace us with their love, hospitality and amazing food! “I will never look at food the same after this trip” said grade 11 student Dante Colucci as he took another spoon full of his homemade cavatelli with truffle sauce. In fact the culinary culture of this town is so good that David Rocco and National Geographic
filmed the last episode of the Dolce Napoli series here.

During the day trips the students visited marvels such Matera, the Amalfi Coast, Salerno, the Greek ruins in Paestum, Pompeii and Napoli. So much beauty, history and culture in a small area really fascinated the Canadians who were not used to going on school excursions to places like the ancient ruins of Pompeii. These places offered lessons that cannot be taught in the classroom, lessons that students will cherish for many years to come. The guided tours in English led by teacher Gianluca Saggese created a strong connection with place, space and time that students
could relate to. Grade 12 student Lucas Lauzaran who came on this trip second straight time and has a passion for history said “the ancient ruins suddenly become alive, filled with meaning as you can imagine what daily life was like for the people who walked these streets long ago”. 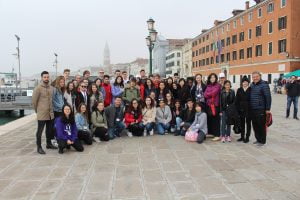 Among the many great experiences talk focused around visiting Matera, Basilicata’s jewel and the UNESCO capital of culture 2019. STR student Noah Stoodley who is an aspiring photographer gifted the group with breathtaking images and mentioned how this experience has inspired him even more to pursue his dream. Students also enjoyed watching the live Serie A match between home team Napoli and visiting team Genoa. What a vibrant experience! STL student Natasha Cherubino called it the most exciting sporting experience ever with the loudest and most passionate fans she’d ever seen! Salerno was another highlight for many of the students. This beautiful tree-lined seafront promenade is widely considered to be one of the most
beautiful in Europe and our students definitely agreed as the seaside selfies flooded social media. A lot of the students enjoyed playing soccer in the piazza with the local Italian kids and just mingling with the local people who really made the group feel at home. Students Fabiano Giglio and Simona Mancini spoke of how humbled they felt by the amount of history our ancestors have left us with especially when we visited Matera the second-longest continuously inhabited human settlement in the world! Carla Haddadin also picked up some Italian as her caption on her Instagram post of her memories read “l’esperienza più bella della mia vita, bei tempi passati con persone di qualità”.

It was also pleasing to see the amount of thank you e-mails that flooded in from parents and students expressing their gratitude and satisfaction with this enriching, well-organized, positive, and life-enhancing program. Among them was from a grade 11 student Bianca Turchiaro who wrote:

“I truly do not know where to begin when talking about this trip. I can honestly say it was a life-changing event, with an amazing group of people. A few people asked me if the trip was worth the money, and without hesitation, I said that it was worth much more than what it cost. The incredible food, breathtaking views, positive atmosphere and the great group of people made this trip an unforgettable experience. I returned to Canada with a much more positive attitude, and a better appreciation for both Italian and Canadian cultures, as well as a new family that never fails to make me smile. If the same trip is available in 2019, I’ll be first in line for my ticket!”

The bonding between the students was another positive aspect of the trips. They learned to work and live collaboratively with each other.  These relationships are going to last them for a lifetime. Staff and students would like to thank the YCDSB, Principal Joe Servidio and staff for giving these students such an amazing opportunity that they will cherish in their minds and hearts for a very long time.