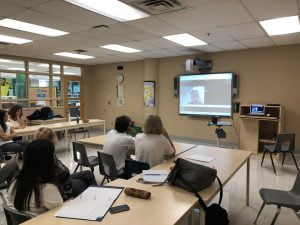 On Monday, September 17th, Cardinal Carter students in Ms. Brand’s Communications Technology class had the privilege of talking to Academy award winning Director Louie Psihoyos. The students had watched his 2010 Best Documentary The Cove and had lots of questions.

Despite a 3 hour time difference, Mr. Psihoyos met with us virtually to share insights and inspiration about filmmaking, photography, perseverance, and life. Among a few of his notable quotes included:

“Test your film with others during the process to make sure it’s working and to get another perspective. You have to fail to learn how to succeed.”

“A film, if done well gives you enough time for people to change their ideas. People change their belief systems based on what they feel, not what they know.”

Here is what one student had to say:

It was such a cool experience to be able to talk with someone who has had such success in the industry. To know that he won an Oscar not too long ago, and that he took the time to speak with us was incredibly intimidating. I think we all had that star-struck moment in the beginning. Mr. Psihoyos gave us insight into his own documentaries (past and present) and talked a lot about techniques that were relevant to our project in Comm tech. He also gave us a lot of advice around working in film/tech fields and how to follow your passion.  All and all an incredible opportunity, thanks again to Ms. Brand and Ms. Casa Todd who made it possible!  —Megan Raso

Here is a snippet of our 30 minute conversation:

Students are currently researching and planning their own documentary and will begin the filming stage next week.

It’s not every day that students can say that they have had the influence of a world-renowned director to help them in the process!