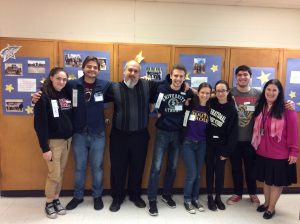 Kindergarten students in Mrs. Pianezza’s class at Our Lady of the Annunciation CES read many books together last fall that were themed on the virtue of compassion. One of the books, Lily and the Paper Man by Rebecca Upjohn is about a little girl who donated clothes to a man who is homeless, living outside her family’s apartment building. When Mrs. Pianezza asked her students how they can show compassion to others, one student suggested that they can give “hats to the poor people.” This became the catalyst of a faith-in-action class project that saw the Kindergarten students knit hats to give to people experiencing homelessness.

The students had a daily opportunity to each knit a row of a hat on a knitting loom. Students also wrote messages of hope on the outside of envelopes that the hats were later packaged in.

Thank you to the Youth Group of St. Jane Frances Church in Toronto, which graciously agreed to distribute the Kindergarteners’ hats. Youth Group Leader Marina DiPasquale and six others from the church visited the Richmond Hill school before the Christmas break on December 21st, where they were presented with the hats during a special and inspiring school-wide assembly. The Youth Group has distributed the hats, and the students hope they have brought warmth to people in need this winter.

“The Christ-centred mission of each school contains a call to service in the greater community.  Catholic schools form disciples with a social conscience who put their faith into action.”

Renewing The Promise:  A Pastoral Letter for Catholic Education