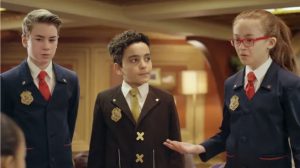 Leonidas Castrounis is a 13 year-old, Grade 8 student at St. Brendan Catholic Elementary School in Stouffville. He is also an actor who has appeared in several films and television shows including: My Big Fat Greek Wedding 2, Recon, Odd Squad, Shadowhunters: The Mortal Instruments, Workin’ Moms, and will appear in an upcoming episode of … END_OF_DOCUMENT_TOKEN_TO_BE_REPLACED