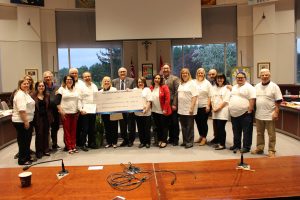 On May 30th,  YCDSB Board of Trustees presented a cheque to members of the Vaughan In Motion charity at the Catholic Education Centre in Aurora, in the amount of $6,380.60. This amount was raised through a loonie-toonie drive at Vaughan schools as well as a Student walk event.

Vaughan In Motion is a 100% volunteer‐staffed, not‐for‐profit organization dedicated to raising funds for equipment and programs for cancer care in the community. Founded in 1997, it has directed over $1.2 million dollars towards cancer care across York Region.

The proceeds from the Vaughan schools’ fundraising will go directly to cancer care programs at Mackenzie Richmond Hill Hospital and the new Mackenzie Vaughan Hospital.

In addition, the tremendous support of our participating students was recognized by charity sponsors with a series of special incentive prizing.  Congratulations to the following!

Each won a Pizza Lunch donated by “food4students” for raising the highest amounts as a classroom.