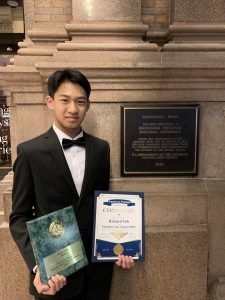 2019 has been a busy year for this SBA student who successfully balances his studies with piano practice, awards, and honours. Dominating the Ontario piano community, Richard has won over 16 regional competitions this year alone! He advanced to the finals of the coveted Ontario in Piano Concerto in May, where he went on to secure his third provincial championship (2016, 2018, 2019).

In addition, he was recently featured in the 2019 American Protege Gala Concert on June 8th, where he was successfully debuted at the 2800-seat Stern Auditorium in Carnegie Hall, New York.

Richard also captured the OYMI (Outstanding Young Musician International) Piano Competition in the Canadian Region in May, and will represent Canada at the International Final, to be held in Boston at the prestigious Berklee College of Music in August.

On the performance side, Richard announces a few concerts dates in the upcoming season. He will be featured and presented as piano soloist with symphony orchestras including The Northumberland Orchestra, and CAST (Chinese Artists Society of Toronto) Symphony Orchestra in November/December 2019 and February 2020.

York Catholic and St. Brother Andre wishes Richard the best of luck in his upcoming performances!