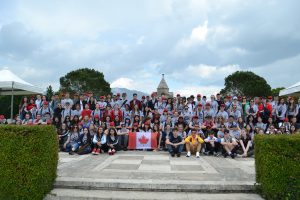 In a life changing extension of faith-based and academic studies, students and staff from eight York Catholic high schools travelled to France and Italy this month to take an active role in world history. In both countries, our York Catholic student ambassadors took part in official WWII ceremonies of remembrance, and in Italy, had the privilege of attending a special celebration of the Mass.

They were young, as we are young
They served, giving freely of themselves.
To them, we pledge, amid the winds of time,
To carry their torch and never forget.

75th Anniversary of The D-Day Invasion:

On June 6th, 1944 … on beaches along the coast of Normandy in France, Allied troops commenced the largest seaborne invasion in history. Thus began the liberation of German-occupied France from Nazi control, laying the foundations of the Allied victory on the Western Front.

On June 6th, 2019 … a delegation from YCDSB, numbering 155 strong, joined student groups from across Canada to stand in solidarity at Juno Beach. Students, staff and international government dignitaries took part in an official ceremony of remembrance, commemorating the troops from Canada and around the world who served, and the thousands who fell.

The longest running ground campaign of WWII, deploying more than 93,000 Canadians along with their allies from Great Britain, France and the United States, this action played a vital strategic role in defeating Germany, pushing from the south to the north of Italy in a grueling series of battles from July 1943 – May 1945.

Central to this path of devastation was the town of Cassino, south of Rome. It was here that the York Catholic delegation had the opportunity to attend Sunday Mass at the ancient site of the rebuilt Abbey of Monte Cassino, and later a military ceremony of remembrance at the Cemetery of Cassino with members of the community, as well as local and federal officials.

Truly a time to remember.