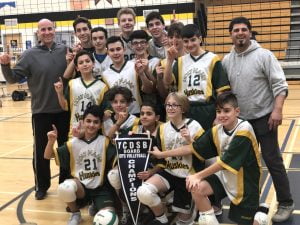 Hard work. Determination. Perseverance. A positive attitude. Great sportsmanship. These are the ingredients that make up Holy Name Catholic Elementary School’s boys volleyball team. This year, after winning 26 out of 28 games in the season, they were crowned the 2019 volleyball champions at the Board-wide tournament.

Each year, schools across the York Catholic District School Board participate in local tournaments. If a team wins, they move on to compete in the area tournament. The top two qualifying teams will play against each other at the final Board tournament.

“This year, the team’s main focus was on passing, control and trusting in your teammates. They lost their first two games, but they never quit and continued to trust in each other and played like a team,” said Sam D’Amata, Coach, and Daniel Niro, Assistant Coach at Holy Name. “Their hard work paid off. They dedicated many hours to attend practices before and after school. We are so proud of the boys for this achievement.”