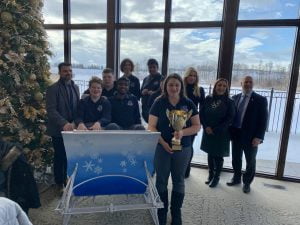 St. Brother Andre has participated in the championships since 2009. In 2010, St. Brother Andre placed first overall at the Special Olympics Ontario and Canada’s Invitational Bocce Tournament.

These athletes are a part of York Catholic’s Functional Life Skills Program that support students with moderate to severe developmental disabilities and delays in their education, by working on alternative learning methods with a focus on practical daily living skills.

Bocce, also known as lawn bowling, is a sport that is played on any level ground such as pavement or grass. Students form two teams with an even number of players, usually four, on each team. The game begins with one team throwing a small ball, called the jack, into the court. The players then take turns throwing the ball closest to the jack. The team that throws their ball closest, wins.

“I am so proud of all our students. Their success in winning the Youth Bocce Championship for the 8th time is due to the dedication of our players who can usually be found at our local community centre every Wednesday morning practicing. They’re constantly encouraging each other to do their best,” says Daniela Sambolec, Special Education Teacher at St. Brother Andre.

St. Brother Andre has been invited to compete at the upcoming eastern tournament on Jan. 29, 2020 at Centennial Community Centre in Markham. Good luck Julia A., Mark B., Sahana N. and Brendan N.!

Below is a full list of YCDSB schools that participated in the Youth Bocce Championship: