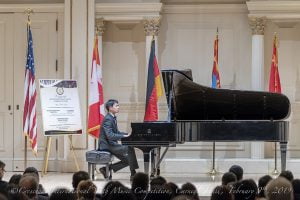 To his teachers and friends, he’s a young student who is enrolled in the full advanced placement program at St. Brother Andre, and a teenager who enjoys bike riding and playing video games.

However, outside of school, he’s already made quite an impressive name for himself in the world of music. Richard is a three-time Ontario champion (OMFA) in piano concerto, and also a three-time national finalist at the Canadian Music Competition. In 2019 alone, Yeh won more than 16 regional competitions and scholarships, including Steinway & Sons, Kiwanis, Yips, Crescendo, Elite, Outstanding Young Musicians International (OYMI), Global Outstanding Chinese Artists Association (GOCAA) and The Royal Conservatory of Music (RCM).

Not only that, but he’s also played at some of Canada and the world’s most prestigious stages, including Suelly Hall at the Boston Conservatory at Berklee and three-times as a piano soloist at New York City’s Carnegie Hall. Richard has also played with some of the world’s best orchestra’s, including the Chinese Artists Society of Toronto (CAST) Orchestra and Orchestra Toronto.

“I began playing piano at the age of five. It started off as nothing more than a hobby until I started competing. Piano has become a way for me to project my emotions through music,” says Yeh.

At age 12, Yeh became a scholarship student at Canada’s renown Phil and Eli Taylor Performance Academy for Young Artists at the Royal Conservatory.

Music is truly a passion of Richard’s – a passion that he wants to share with others. On his downtime, you can find Richard volunteering at Scarborough Health Network by performing regular recitals for psychiatric patients in the music therapy program.

What’s next for Richard?

Richard has recently been invited to perform on Feb. 29 with the Northumberland Orchestra as the 2019 Concerto Competition winner. He will also be touring with renowned orchestras in major cities of China and North America as the winner of the GOCAA’s Junior Pianist Contract Award.

“While I do enjoy playing piano and excited for what music as a career has to offer me, I am also interested in the sciences, particularly the medical field. In the future, I hope to continue playing piano and performing while furthering my studies,” says Yeh.

Congratulations on all your successes, Richard! York Catholic is looking forward to seeing what you’ll accomplish in 2020.