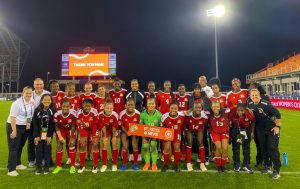 Three of four Uddenberg sisters recently competed in the Concacaf Women’s Olympic Qualifying tournament in McAllen, Texas at the HEB Park with the Saint Kitts and Nevis National Football Team.

“We are so happy that Kayla and Cloey had this opportunity to participate in such a memorable life experience together with their older sister,” said Dan Bruni, principal at Jean Vanier. “It’s always exciting as a school community to support students as they compete on the international stage.”

All four sisters have one thing in common – a love for soccer. They began playing the sport after being introduced by their parents at a young age.

“I honestly play soccer for the love of the game. Soccer has always been my get away. I could be stressed about school or anything, but once I am out there playing, it all goes away,” said Kayla.

Cloey currently plays on the Jean Vanier soccer team. Kayla plans to follow her in her sister’s footsteps and will try out in the spring. Meanwhile, Carley plays on the Seneca Sting Woman’s Soccer Team and Kenley, plays for the Aurora Youth Soccer Club (Rep) Team.

Cloey, Kayla and Carley were encouraged to try out for the team by their father. Impressed by their skills, the Saint Kitts and Nevis team invited them to join their club.

Recently, the Saint Kitts and Nevis team gave it their all at the Concacaf Olympic Women’s Football qualifiers against Canada. This Olympics qualifying round tournament is the farthest the team has ever gotten in the Olympic qualifying tournament, and a first for the Uddenberg sisters. If the team won this round, they would have played one more team before heading to the Olympics.

“This tournament has been incredible. To play in such a big competition makes me proud of myself. It’s also made me realize that anything is possible if I keep putting in the work,” said Cloey. “I love being able to play with my sisters on this team and have them beside me as we went through this amazing journey”.

“We are very proud of the Uddenberg sisters. Although they won’t be heading to the Olympics this summer, this qualifying round marks the furthest they’ve gone towards qualifying which is a major accomplishment,” said Joseph Cordi, principal at Corpus Christi.

York Catholic is proud of the Uddenberg sisters and look forward to continuing to watch them on the international soccer field!