The Holy Cross Academy Boys Soccer Team had a tremendous tournament in Walkerton, Ontario competing at the OFSAA Soccer Championships from June 2nd-June 4th. The boys went undefeated in the tournament scoring 24 goals and conceding 3 against the best high school soccer teams in Ontario. The group stage culminated in finishing 3-0 and the class of Group A. In the knockout stage, the team faced formidable competition in Belle River from Windsor and Louis Riel from Ottawa, but proved to be a force that could not be stopped.  In the finals, Holy Cross faced their toughest competition, tournament favorites Mother Teresa from London, Ontario. The team battled through early adversity to win 1-0 and bring home a gold medal and be crowned Champions of Ontario. Holy Cross is now the only soccer team in York Region with three OFSAA CHAMPIONSHIPS!!!

Mr. Iafrate, Mr. D’Sylva and Mr. Mamaini are extremely proud of the dedication and passion this team has shown. We would like to extend a  special thank you to the Grade 12’s who showed great leadership throughout the season; what a great way to end their high school career! 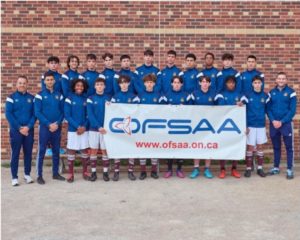 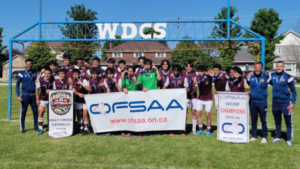