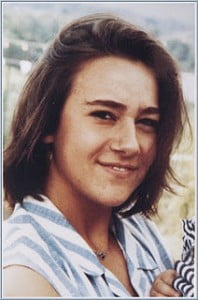 In 1971, after praying and hoping for a baby for more than 10 years, Ruggero and Teresa Badano of Sassello, Italy, welcomed a little girl whom they named Chiara.

Even at the age of four, Chiara seemed aware of the needs of others. She would sort through her toys to give some to poor children, and she would never give away just the old or broken ones. She invited less-fortunate people into the family’s home for holidays and visited the elderly at a retirement center. When other children were sick and confined to bed, Chiara visited them. When she was 9, Chiara became involved with the Focolare movement and its branch for young people. Focolare emphasizes brotherhood and unity among all people. Chiara had a lot of friends, she played sports, and she loved to sing and dance. But when asked, she said she did not try to bring Jesus to her friends with words. She tried to bring Jesus to them with her example and how she lived her life. When she was 17, Chiara learned she had a very serious form of bone cancer. Treatments were painful and unsuccessful. She became paralyzed. One day someone asked her if she hoped to walk again, and her answer was no. When she suffered, she felt closer to Jesus. She even refused to take pain medication that would make her too sleepy. Despite her illness and being confined to bed, Chiara wrote letters and sent messages to others. She attended Focolare youth meetings. She inspired everyone who she encountered with her faith and love for others. When her life was nearly at an end, she said, “I have nothing left, but I still have my heart, and with that I can always love.” Chiara died in 1990. Within nine years, the bishop of her diocese began the work on her cause for canonization. Pope Benedict XVI declared her “Blessed” in 2010. 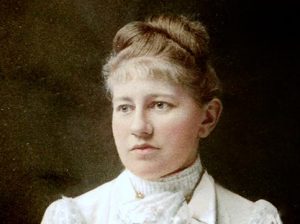 Patron of racial justice and philanthropists.

St. Katharine Drexel is the second American-born saint to be canonized by the Catholic Church. She was an heiress who became a religious sister and a brilliant educator.Born in 1858, Katherine and her sisters were educated by tutors. Three afternoons a week their step-mother opened the doors of their home to serve the needs of the poor. On February 12, 1891, Katharine made her first vows as a religious and dedicated herself to working for the American Indians and African-Americans in the Western United States. Taking the name Mother Katharine, she established a religious congregation called the Sisters of the Blessed Sacrament for Indians and Colored, whose members would work for the betterment of those they were called to serve. In 1915, Katherine founded Xavier University in New Orleans, the first Catholic University in the United States for African-Americans. By the time of her death in 1955, she had more than 500 Sisters teaching in 63 schools throughout the country and she established 50 missions for Native Americans in 16 different states.Katharine was remembered for her love of the Eucharist and a desire for unity of all peoples. She was courageous and took the initiative to address social inequality within minorities. She believed all should have access to a quality education and her selfless service, including the donation of her inheritance, helped many reach that goal.